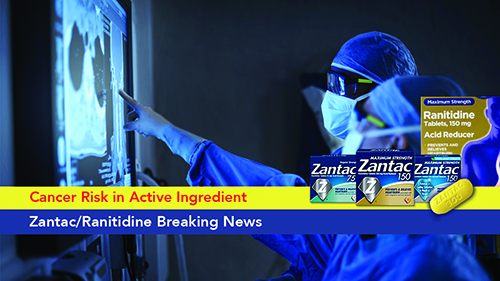 At one point it was the top selling drug in the world, now the FDA is investigating whether the popular OTC and prescription heartburn drug Zantac causes carcinogens to form in its users. The issue stems from Zantac causing levels of the probable carcinogen N-nitrosodimethylamine (NDMA) to rise in the users’ bodies.

Valisure’s research, along with that of Stanford University and others, found that NDMA was the result of the “inherent instability” of the ranitidine molecule. This means that all manufacturers, brand or generic, and all lots of ranitidine-containing medications are affected and could generate very high levels of NDMA in the human body.

Its important to first understand that the problem Zantac is having is way different than the problems with the blood pressure medication Valsartan. In the case of Valsartan we had a contamination problem caused by a change in manufacturing practices. In the case of Zantac though, we have a root product problem where Ranitidine has been shown to form thousands of nanograms of NDMA in the human stomach. These discoveries are not new if you look at the image below you will see that this was discovered in the 1980’s.

In 2004 Ranitidine (Zantac) was linked to Bladder Cancer in a National Cancer Institute study. Study Link.

Another 2017 study shows how Urination of ranitidine into wastewater suspected as source of NDMA in municipal drinking water. Study link

So what the hell right ? 35 years on the market and now they tell us that its cancer causing ?
Ranitidine likely generates millions of nanograms of NDMA in humans where the FDA maximum permissible daily exposure of the probable human carcinogen, NDMA, in pharmaceuticals is 96 ng.

How do we move Forward ?
There are a few ways of looking at this developing MDL as we see it. First, you have exposure of millions of people to a cancer causing substance NDMA for 35+ years. Many will end up with different cancers over their lifetime and a known source of this cancer will be Zantac. This would mean you sign up everybody that has taken Zantac and you guys make an MDL that has two tracks one being exposure and one being cancer.Another way of looking at it would be signing up people that have already developed a cancer that Zantac could have caused. Like Bladder Cancer, Stomach cancers and a total of 8 different cancers can be tied to this. We can then use the landing page to Disqualify people that have not developed a qualifying cancer and only send the qualifying cancers though to an intake center for signing-up.

For the advertising attorneys- we already have a few big names that cases can be referred to just ask us for introductions to ref. firms.

What do we know so far about prices per lead?
In the last 3 weeks we have been running about a million dollars in advertising spend towards this target market and here is what we know.

If you are just looking for anybody that took Zantac with a qualifying cancer or not we see prices of $30-40 per lead and we see huge volume even on big spends.

If you want to disqualify people so only people diagnosed with the correct cancer is coming though we see prices of $175-$200 per lead.

Our current spend on Zantac is around $75,000 per day and increasing fast.

Our new Managing Director, Lucas Gerler can also be reached with any questions you have on running new projects at lucas@xsocialmedia.com.

A Great Read To Learn Facebook Advertising For Law Firms